There's More To Life Than Hats

There’s More To Life Than Hats 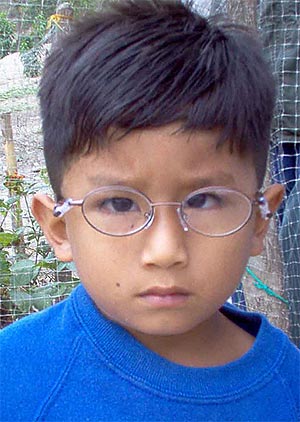 While we were eating and buying hats woven by her daughter-in-law, the woman’s five-year-old son was in perpetual motion, running in and out of the house, all around the room, under the table, happily squabbling with his sister and brother at every opportunity. Typical five year old, right?

Except for his eyes. As I enjoyed watching his non-stop orbits around and through us, I saw that something was seriously wrong with his eyes. They appeared to operate independently, often looking in opposite directions. Fine for a Jackson Chameleon but not for a little boy.

I started to worry about how this would affect his life. No doubt he would be teased mercilessly by other kids. Most likely he would never be able to learn to read. Not good prospects.

I hoped maybe we could help. We had arranged to bring an optometrist to the village. She would be there Thursday. It was Monday. We wanted to give eye exams to the weavers and provide free glasses as needed.

Jorge explained about the eye doctor. He asked her to come for herself and to bring the boy. We would ask the doctor if the boy’s condition could be treated.

They both came. As did forty-plus others we had invited, mostly the older weavers and a few younger ones who knew they had vision problems.

I waited nervously while the doctor examined the boy. She told the mother that we had caught the problem in time. He was young enough that he could be treated successfully with a progressive series of corrective lenses. I told the doctor and the woman that I would be more than happy to pay for whatever needed to be done.

Then I had to go outside. I was having a problem with my own eyes. They were leaking all over my face.

A year later (November 2007), the mother reported that he is definitely improving. He has a second pair of glasses, the second step on his road to normal vision. When I walked next door to a local mini-tienda to buy snacks and stuff for the documentary video crew I was guiding, he tagged along after me. While I was paying the shopkeeper, the boy reached up and took the bag of stuff off the counter then carried it back to his house for me. He put it down and ran off to play again. He never said a word. I understand shy. He had spoken volumes.

As I watched him zoom around the corner of his house, my eye problem returned.