About Us: Featured in Luxist 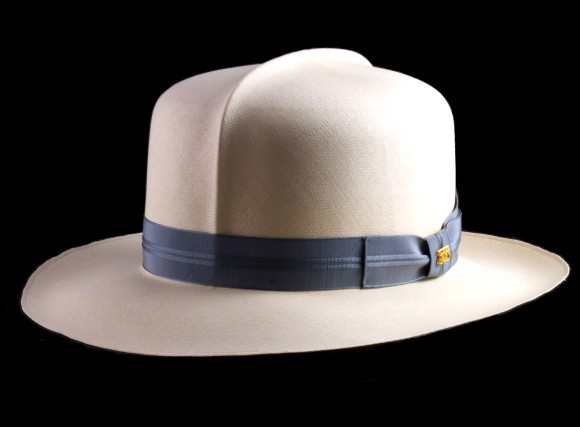 Brent Black, renowned authority and preeminent purveyor of handwoven straw hats, is now offering the world’s finest Montecristi Panama for $100,000. Known simply as “The Hat”, Black calls the exquisite creation the most finely woven Montecristi Panama the world has ever known. Authentic Montecristi Panamas, the world’s greatest, are made from extremely fine toquilla straw and woven only in Ecuador; a handful of master weavers produce the best of the best, which sell for tens of thousands of dollars apiece. The Hat was commissioned by Black from the king of the master weavers—Black calls him the best weaver in history—Simón Espinal, who lives in the village of Pile in Montecristi Canton. It took him five full months to complete.

After Espinal completed the weaving, five other artisans spent several more weeks preparing and finishing The Hat. An incredible amount of handwork goes into Montecristis; hence the price. You can see some of it in the gallery and a more detailed exposition here. The Hat has not been blocked into a style or sized yet, and is awaiting the purchaser’s final instructions. Black offers dozens of different styles and bespoke finishes, some based on vintage patterns such as the dashing Optimo design, above. The Hat is so incredibly fine it weighs less than one ounce. “It is as thin as my stationery,” Black tells The Classicist. “When I handle The Hat, I do not worry that it might fall to the floor if I drop it; I worry that it might float away.”

All photos are those used in Luxist’s original posting.
Only the photo outlined in blue is “The Hat.”
(Click thumbnails for larger versions)

While Espinal could theoretically create another one equal to The Hat’s fineness, it’s not a given that he could replicate the feat. “I have been obsessed with the very finest hats for more than 20 years,” Black notes. “I have researched the finest hats woven during the 20th century. There is simply no hat that is comparable to this one.” At first Black says he did not want to part with The Hat. However, “if someone were serious enough to pay $100,000 I think I’d have to give it up,” he concedes. “I represent the interests of the artist as a gallery does. Simón would be pleased for me to sell it.” If that’s out of your range, don’t worry—Black’s best hats, other than this unique work of art, sell for $5,000 to $30,000. You can work your way up.

Black, who’s based in Hawaii, started the Panama Hat Company of the Pacific in 1988 for the specific purpose of trying to preserve the art of hand weaving the finest Montecristi hats. Each of the hats he sells is custom made to order—hand woven, hand blocked and styled, custom sized. The price isn’t about the label; it’s about the labor. And the art. “I believe the most direct way to encourage any artists is to buy their work and to pay them high enough wages and commissions that they will be eager to create more of their art,” Black says. “So I pay the weavers higher prices than anyone else in the world. Plus I pay the artists commissions when their art is sold. Simón Espinal is the highest paid weaver in history. He only weaves 3 or 4 hats per year, and they’re priced between $10,000 and $30,000 apiece.”

At those prices you’d think they’d be something of a hard sell in these times, but the rarity and quality mean such hats are always at a premium. “I am happily overwhelmed with orders,” Black notes. “At the moment I have orders for five hats in the $10,000 to $25,000 price range, plus a few more in the $5000 to $10,000 range.” Black also has a large celebrity clientele; among the luminaries who own his creations are Pierce Brosnan, Harrison Ford, Peter O’Toole, George Hamilton, Anthony Hopkins and Arnold Schwarzenegger. Of course none of them owns one as fine as The Hat. Yet.