Why Does One Hat Cost More Than Another?

The ridiculously oversimplified answer would be: Because it’s a better hat. But of course that only leads to the next question: What makes a better hat? There are several guidelines one uses in judging the quality of a Panama Hat.

The single most important factor in determining the value of a Panama hat is 1) fineness of weave. Three other important factors that affect the price are 2) evenness of weave, 3) color of straw, 4) shaping and finishing. The 5) size of the hat can also affect price. 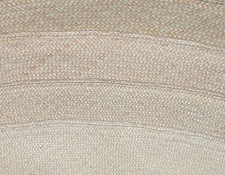 The first thing to examine when judging the quality of a woven hat is the weave itself. The finer the weave, the finer the hat.

When I say that one hat is more finely woven than another, I mean that the individual straws used to weave the hat are thinner, or finer. Naturally, more work and more time are required to weave a fine hat than to weave a coarse hat.

Every time the width of the straw is reduced by half, the amount of work is multiplied by four. So a hat twice as fine takes four times as long to weave. This is why a hat that looks only slightly finer than another may cost significantly more—it took significantly more time and effort to weave it. That little bit more fineness, multiplied by the thousands and thousands of weave “intersections” in a good hat, can add up to several additional weeks of weaving time.

Summary: In the mythical perfect Panama, the rows of woven straw are straight and regular, the straw is the same fineness throughout the hat, there are no gaps or knots in the weave. Better hats have fewer irregularities in the weave and cost more.

Look at the rows of the weave. Are they straight and even? Or are they wavy?

Is the thickness of the individual straws consistent throughout the hat? Or are there areas where the straw is thicker or thinner?

Are there gaps or holes between rows of weave? Are there bumps or knots that interrupt the regular pattern of the weave?

In the mythical perfect Panama, every straw would be the same width, or fineness. They would all fit together with no gaps or holes, no bumps or knots. The rows would be straight and even. The weave would look like neat rows of perfect little diamond shapes. 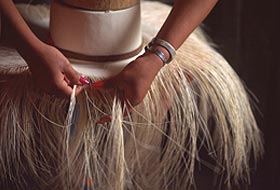 Of course, there is no such thing as a perfect Panama hat. Even in the most exquisite hats, there will be flaws. These hats are not woven by machine. They are woven by human hands, hour after hour, day after day, week after week. One of my advertising posters promises: “Flaws, imperfections, and irregularities guaranteed.” 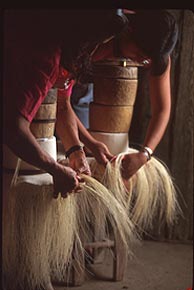 Summary: A hat that is very, very white is probably a peroxide-bleached inexpensive hat from Cuenca. A fine Montecristi hat is more the color of ivory. Even the finest hats will have some red and grayish straw. All hats darken slightly with age. A consistent, light ivory color throughout the hat is ideal, and rare. 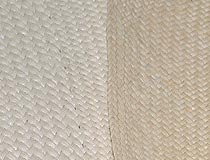 Judging the color of the straw is much more subjective than counting the rows of weave to calculate fineness, or looking to see if the rows are straight and even.

That hat makers in Cuenca (Ecuador) submerge most of their hats in peroxide for many hours to bleach them. A fully bleached hat will be very, very white. Many people like this look. I do not. I prefer a more natural straw color. The peroxide bleaching process, if it’s overdone, can also weaken the straw and shorten the potential life span of the hat. The peroxide-bleached straw will often feel rubbery and unnatural to the touch. Cuenca hats may also be half-bleached, natural unbleached straw, or even dyed purple.

In Montecristi (Ecuador), the hats are bleached with sulfur fumes. This is basically the same process that is used to turn brown sugar into white sugar. Hats bleached in this manner may be very light, but they will never be bright white. Most Montecristi hats are what I would call an ivory color.

Because Montecristi Panama hats are made of natural straw, they will darken slightly over time. I do not consider this a negative. It is simply a reality. I like this natural “aged ivory” color and would never reject a hat simply because it had done what all hats will do eventually. 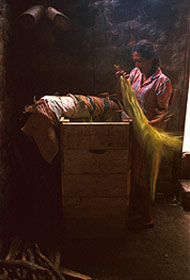 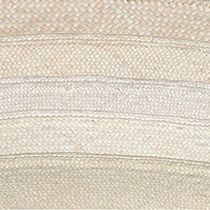 Almost all hats will have some reddish or gray straw. In the photo to the left, you can see a diagonal streak of reddish straw in the hat second from the top. The hat at the top also has some reddish straw in the weave. Even in very fine hats, you often will see gray or reddish straw mixed in with the lighter straw. This is normal. In general, the more consistent the color throughout the hat, the better. But I would recommend against rejecting a hat simply because it has a little gray or red straw. Many people even prefer the subtle patterns and colorings added by the gray and reddish straw.

As you might imagine, I like to wear my own hats. And I have, well…let’s say more than one for my personal use. Thousands and thousands of hats have passed through my hands over the years. And I get first choice. (Beautiful hats that are my size seem to have a particularly difficult time making it into the stores.) Most, if not all, of my personal hats have at least a little bit of gray or red straw. Remember: flaws, imperfections, and irregularities guaranteed. 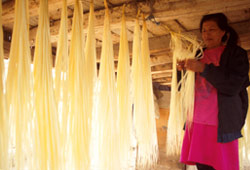 Summary: Almost all Panama hats are shaped by machine. A tiny percentage are shaped, or blocked, by hand. Shaping a hat by hand takes longer and costs more than shaping it by machine. Hand-blocked hats cost more than machine-shaped hats.

A hundred years ago, virtually all hats were shaped by hand. The process of shaping a hat by hand is called blocking. Today, the art of hand-blocking hats is as endangered as the weaving itself.

Putting a hat on a block

There are fewer than six of us in the U.S. who can hand-block a Montecristi Panama hat to my exacting standards. The hands to the right belong to Trent Johnson of Greeley Hatworks.

Blocking a hat by hand

All but a tiny, tiny percentage of the Panama hats on the market today are shaped on a hydraulic hat press. The unshaped hat is put onto a metal form, then subjected to extreme pressure and heat for a few seconds. After pressing them, some manufacturers coat their hats with a clear, glue-like substance to make them stiff so they will hold their shape. Sweatbands and ribbons are put on the hats in an assembly-line manner with as much of the work as possible done by machine.

With hats shaped on a hat press, usually the crown and brim are shaped at the same time, in a single ka-thump of the press. When hand-blocking a hat, shaping and smoothing the brim is a completely separate process from shaping the crown. The brim also requires about 48 hours to properly shape.

A beautifully hand-blocked hat is a work of art, a sculpture in straw. This is not to say that machine-shaped hats are bad hats. Many of them are quite nice. But shaping a hat on a hat press requires much, much less time and art than shaping a hat by hand. 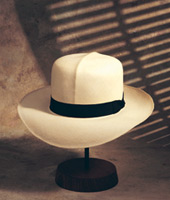 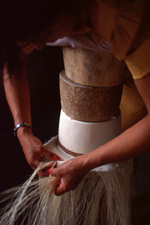 Imagine you are weaving a hat. You have completed the crown. You are now weaving the brim. You have woven the brim out to 25⁄8 inches wide all the way around. You could sell the hat now, or you could weave for another two weeks and sell the hat when the brim is 4 inches wide. If you work on the hat for another two weeks, you would probably want to charge more than if you sell it now. I would. And so would the real weavers.

The same would be true of a very large hat compared with a very small hat. The large hat takes longer to weave, therefore the weaver deserves to be paid more.

Of course, you are more likely to get a perfect fit if you are choosing from eleven sizes than from three. For a knock-around beach hat maybe it doesn’t matter that much if your hat is a little too loose or too tight. But if you are buying a fine hat, you should insist that it really fit you, not just sort of fit you.